In this project, you will add collision resolution to last week’s collision detection and modify your space invaders game into a breakout game.

This week’s demo is effectively an extension of last week’s with some minor changes. The two tasks this week are:

The main demo this week is a simple version of Breakout.

Additionally, we have provided you with a “pegs” demo which must work correctly with your code.

Last week, you implemented find_collision() to detect collisions between two convex polygons. This week, you will implement collision resolution, which changes the velocities of the bodies based on the physics of the collision. There are two main components to implement:

When bodies are polygons rather than continuous shapes, there is no longer a tangent line, but we can approximate a collision axis.

If you implemented the Separating Axis method last week, the collision axis is simply the axis onto which the shapes’ projections have the least overlap.

If you implemented the Vertex Containment method last week, computing the collision axis is a bit harder. The idea is compute a vector pointing outwards from each contained vertex. The vector pointing outwards should have an angle halfway between the angles of its neighboring edges. This can be done by adding unit vectors along both edges. For example, the red vertex below is contained in the blue shape, so adding unit vectors along the edges produces the dashed outwards vector. 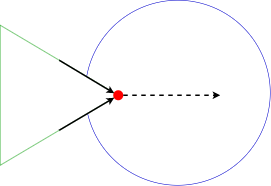 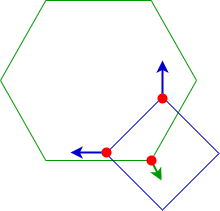 Note that the sum of outwards vectors needs to be normalized since the collision axis is expected to be a unit vector.

There is a simple formula for the impulse due to a collision with a certain elasticity, so we will apply impulses instead of forces to resolve the collision. The formula can be found on Wikipedia, but here’s an explanation:

To conserve momentum, an equal and opposite impulse is applied to the second body.

Because bodies with mass INFINITY are not affected by forces or impulses, it is natural to use them as “walls” in a collision. For example, you could have implemented the bounce demo in project01 by making the star collide elastically with an infinite-mass wall on each side of the scene. This requires a minor change to the formula for computing the impulse: if one of the masses is INFINITY, the reduced mass (m_a * m_b / (m_a + m_b)) in the formula becomes the mass of the other body.

The grading this week will be:

Every group member must fill these out separately to get credit for the project.